Attracted by the northern lights that we observed in the middle of Sweden, we were excited to reach Torneträsk, Sweden’s most northern lake reachable by car. The lake was so large that it had an impact on the local climate. It supposedly increased the chance of a clear sky which is one of the three requirements for seeing the northern lights: darkness, solar wind (a high KP index) and a clear sky.

The weather was still quite nice when we spent a night near Nyluspen: cold but mostly clear sky.

About 150km further north near the river Nedre Laisälven, the weather was more cloudy and rainy.

While staying in the forest under the cloudy sky, my solar panels were only able to collect enough energy to operate my laptop during working hours, so we started using my wood stove instead of the induction cooker to prepare our warm meals. 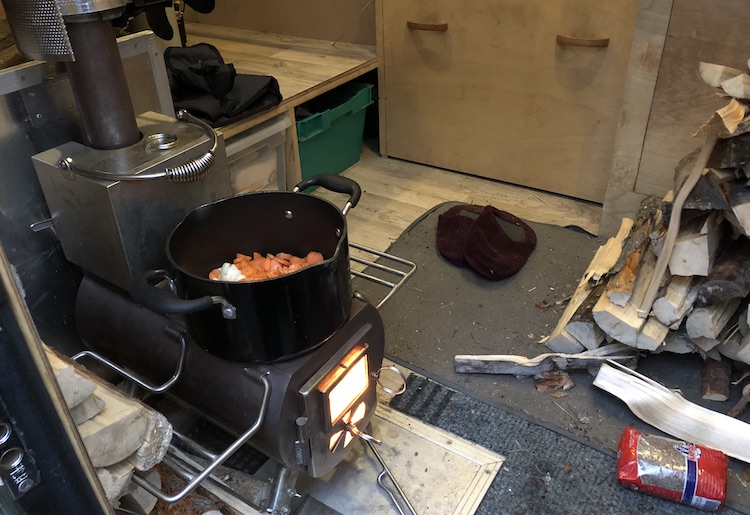 The wreck of a burnt-out mobile workshop van on a construction site reminded me to use the wood stove carefully. 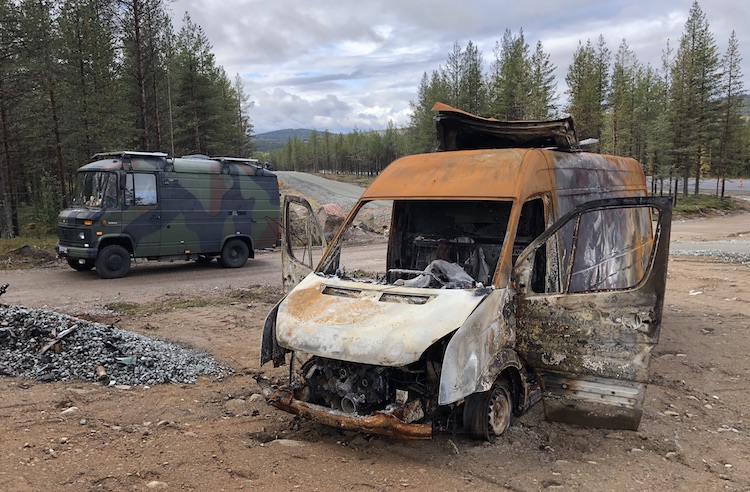 It was raining a lot when we left the nice spot near the river. 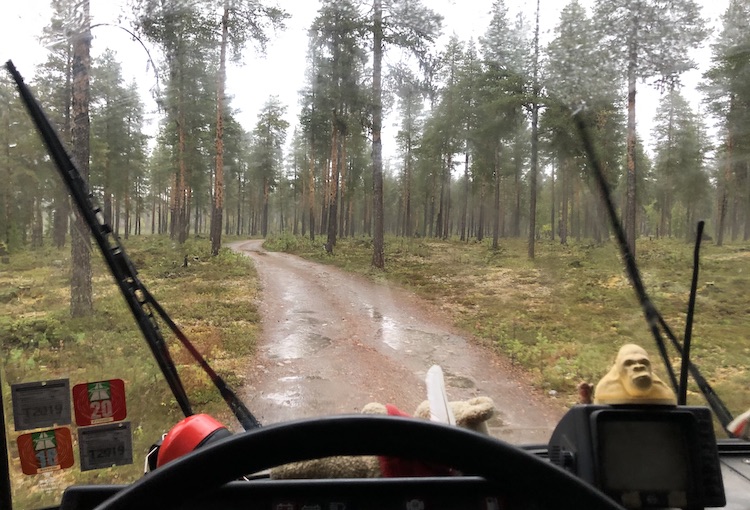 We had to drive quite cautiously. Not only the bad weather, but also the countless reindeers crossing the roads required a lot of attention. 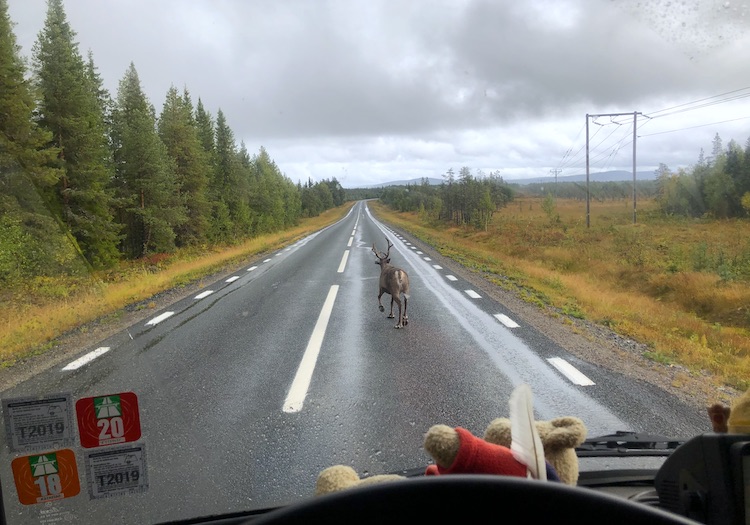 While the weather became colder, we could also notice visual changes in the environment. 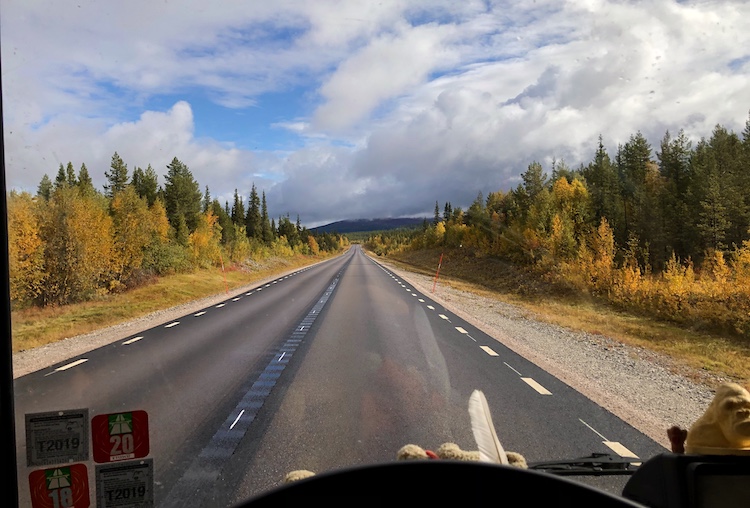 Although it was quite cold when we reached Torneträsk, most of the trees around the lake were still green.

However, a few leaves were already announcing the autumn. 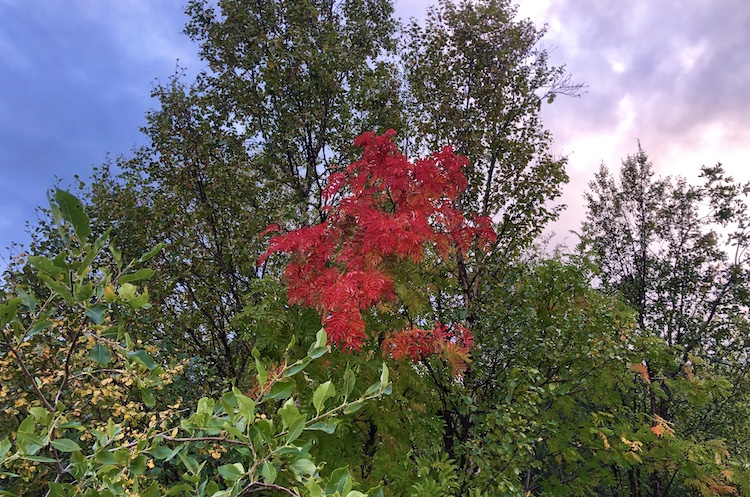 There was less infrastructure around lake Torneträsk than in the woods where we stayed the previous days. The only accessible dirt roads leading to the lakeshore usually ended at groups of little fisher houses.

We didn’t meet anyone but people seemed to occasionally come here for fishing and staying over night in these little cabins. 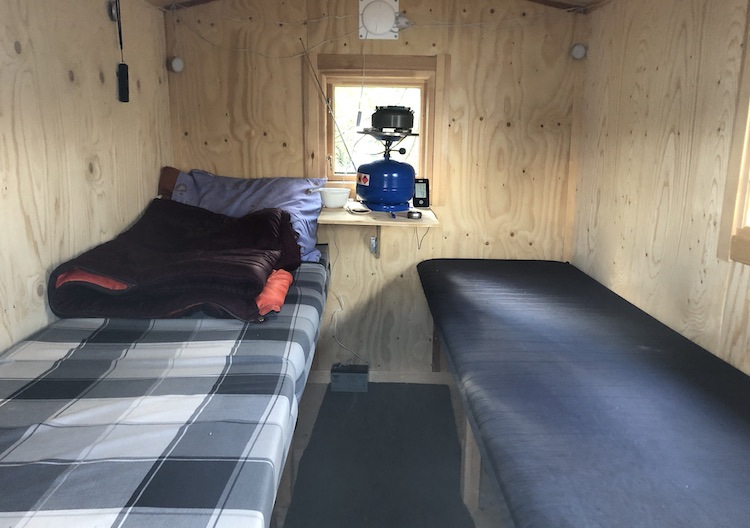 Parked between the tiny fisher houses, we had a nice view toward the northwest where we expected the polar lights to appear at night.

As I struggled taking good pictures of the northern lights near Ringvattnet, I built a wooden stand and downloaded the Camera+ 2 app that would allow me to adjust the exposure settings of my iPhone camera. 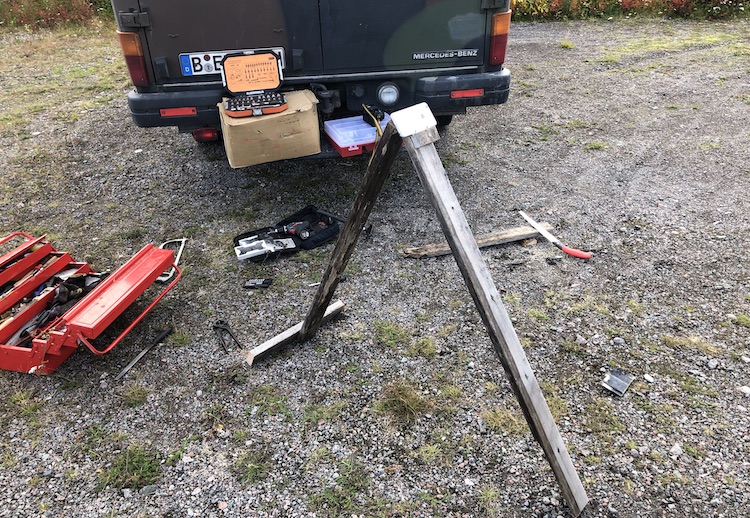 The stand passed the initial test when taking a picture of us posing in front of it. 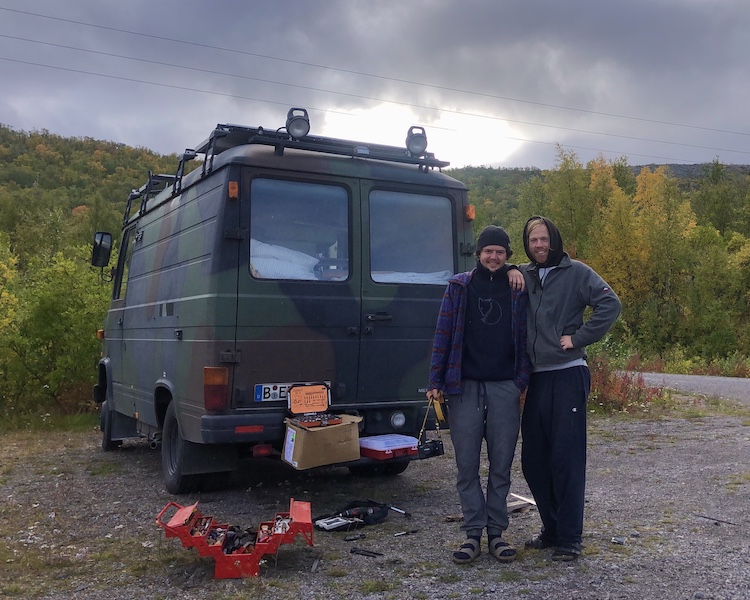 After chopping wood for a warming campfire, we were all set to spend the night watching the sky. 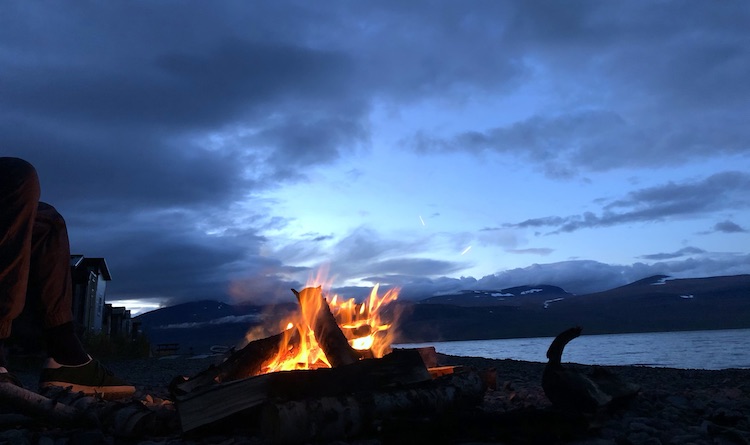 Unfortunately, the night was very cloudy. The moon was the only interesting thing we spotted that night. 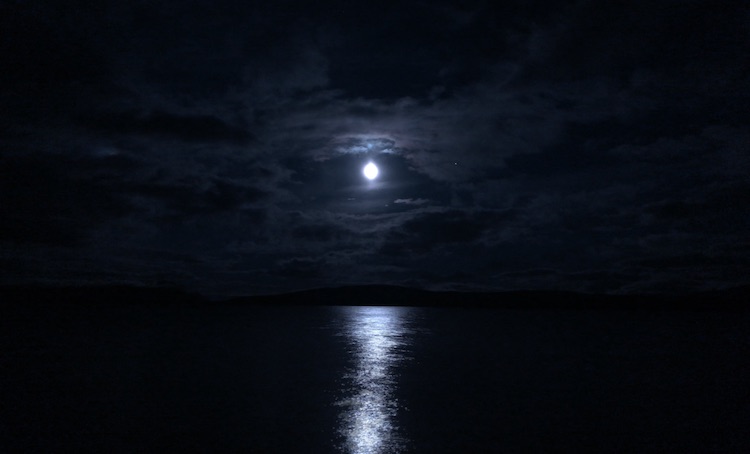 We switched to another location on a small hill that provided an even better view. 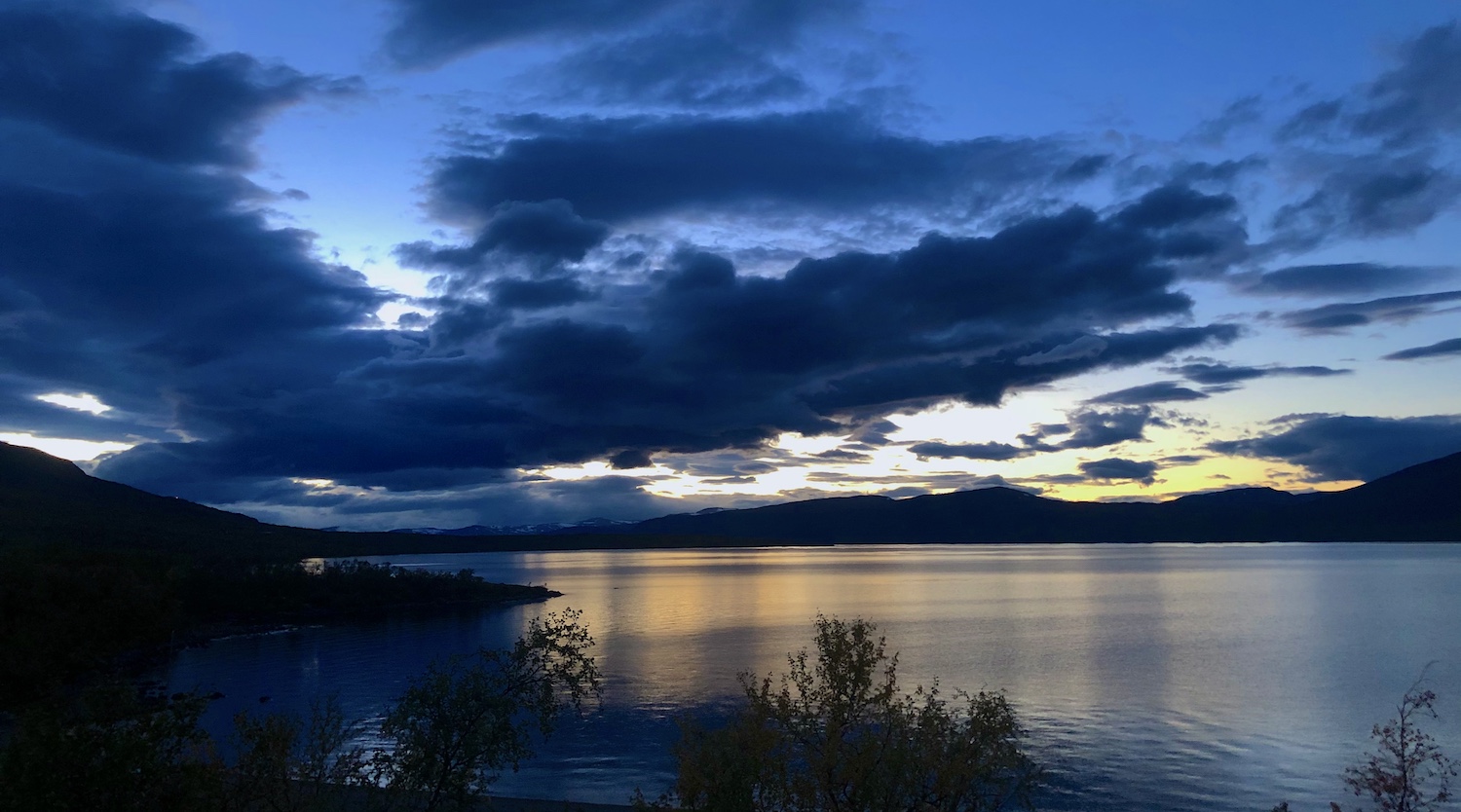 The nights were pretty cold, so we prepared a lot of wood every evening to make sure we were able to stay outside during the night.

We spent a couple of nights watching the sky. Sometimes we stayed up till 3am. Unfortunately, we didn’t manage to see the polar lights. The sky would either be covered with dark clouds or the KP index was too low for the lights to appear.

Exploring the area during the day

Although the northern lights were the main reason for us to visit the lake, we also enjoyed the area during the days. As we didn’t drive a lot, there was plenty of time to explore the lake during my breaks from work.

There were a lot of blueberries and mushrooms all around. Some of them were eatable and others weren’t. 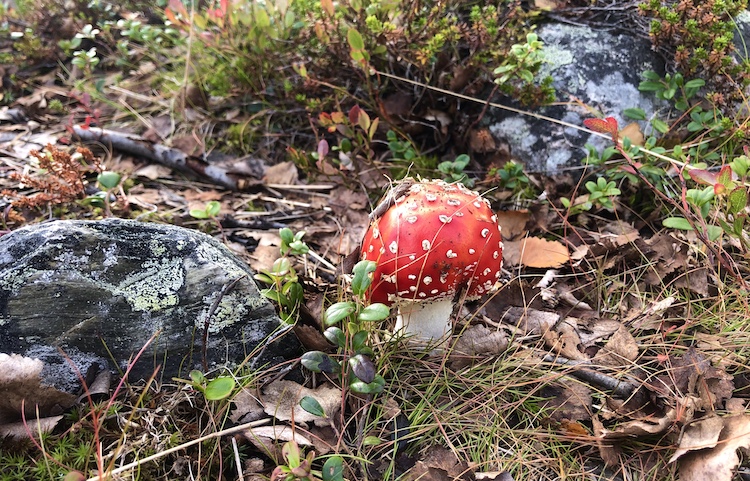 The lake was really nice.

Although the water was ice-cold, we couldn’t resist going for really short baths once in a while. 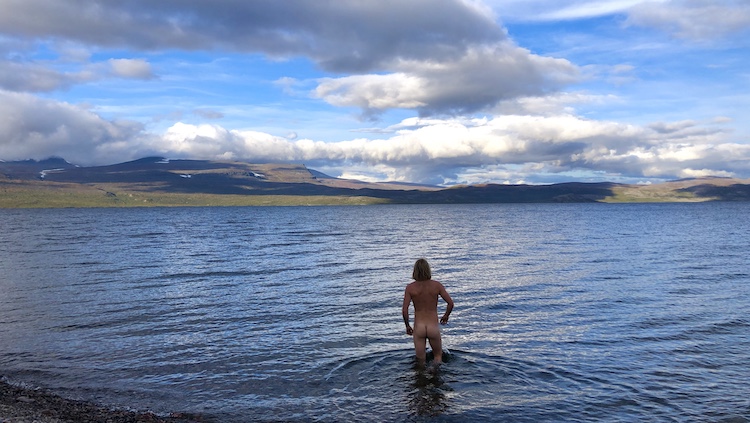 On one of my days off work, we went on an exhaustive hiking trip through Abisko National Park along the Abisko river. 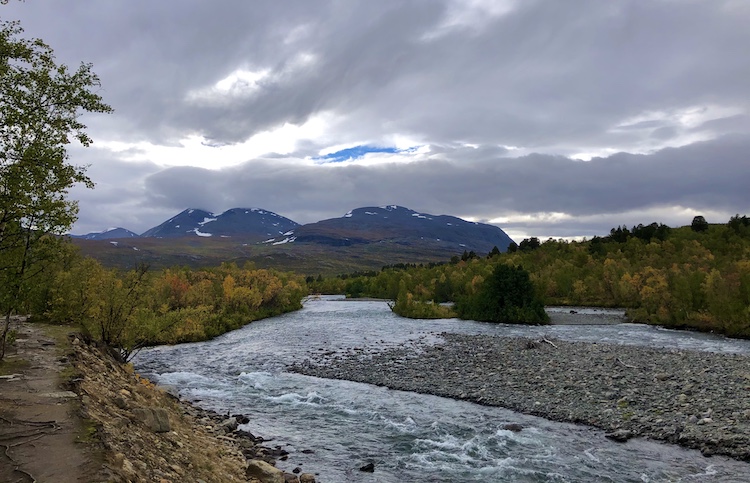 The colors of the leaves created a stunning atmosphere.

We walked all the way to Abiskojaure where the weather was really rough.

There were some interesting cabins without windows. 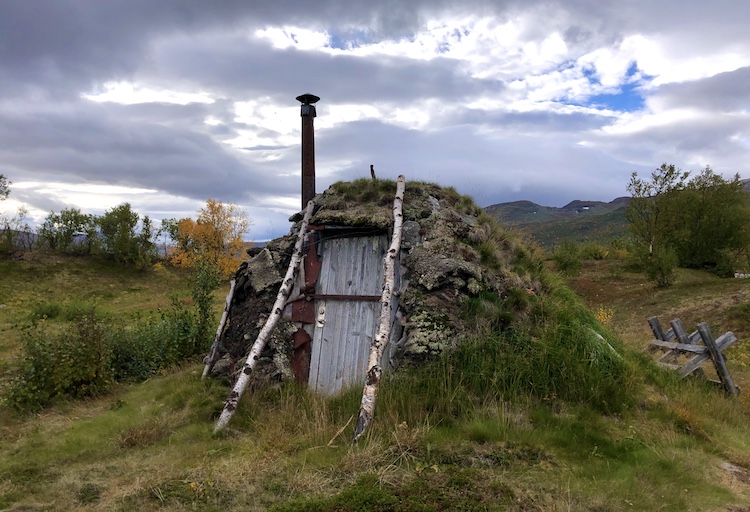 Unfortunately, they were locked so we couldn’t check out the interior.

After coming back from our hiking trip, we switched locations again and found a raised area very close to the Absiko webcams where we had seen awesome live pictures of the northern lights in the past. We decided to stay, although the weather was very bad. We really wanted to see the lights again!

We didn’t see anything during the night because of the bad weather. It was quite cold and raining a lot. I felt quite bad for Moritz. While I was busily working in my heated mobile office, he idled in his van waiting for better weather. Things became even worse when his diesel heater ran into troubles.

Nevertheless, we gave the lights one more chance. I parked my van with the backdoors headed north, so we could observe the sky from inside my van. We found some hope again when spotting the blue sky above my van. 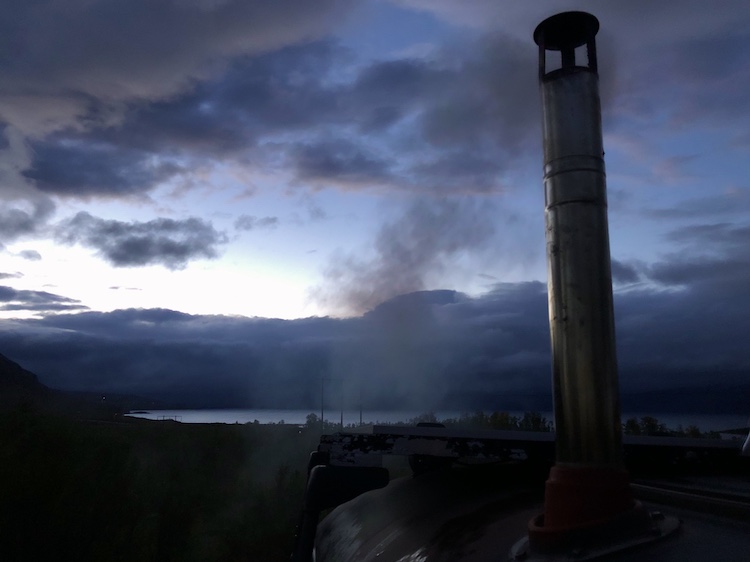 Although gigantic clouds came back covering the sky for the rest of the night, we spend a cosy evening in my warm van.

No more northern lights in 2020

The night was really cold and the mountains around us were covered in snow when we woke up. 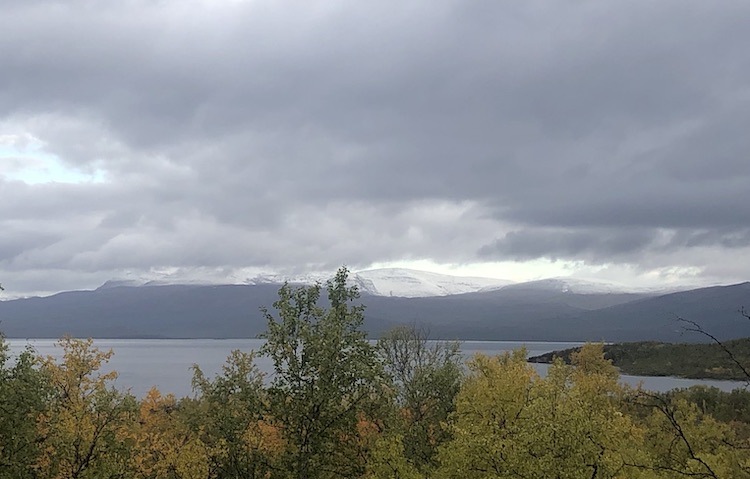 The weather forecast didn’t look great at all. 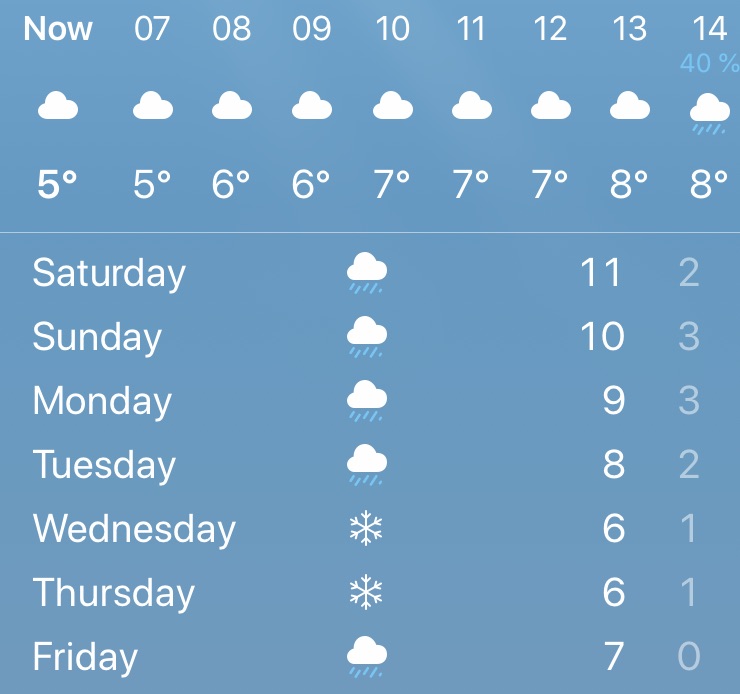 Chances to see the lights seemed quite low, so we decided to give up and started driving toward the southeast where the weather was supposed to be much better. 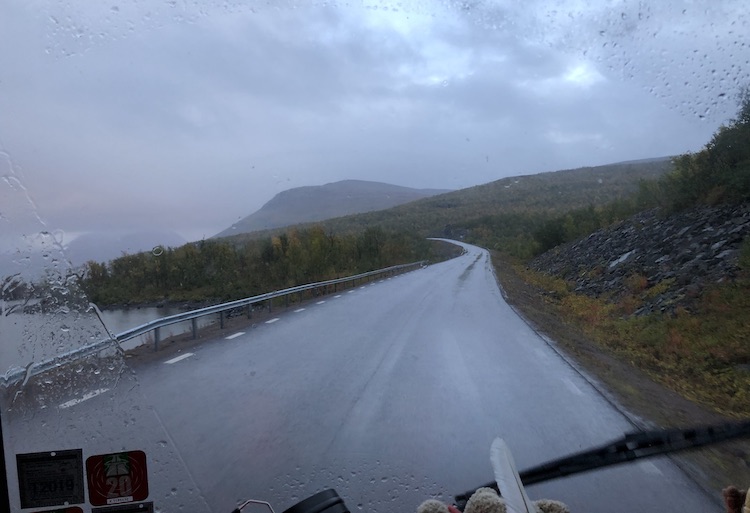 Although we weren’t able to see the northern lights again, we really enjoyed our stay around lake Torneträsk. We definitely wanted to came back again in the future. Nevertheless, we were looking forward to soak up some sun at the northern part of the Gulf of Bothnia.

A Vanlife Minimalist Wardrobe for Women — Always the Adventure

How the heck do you get mail living in a van?! Van Life 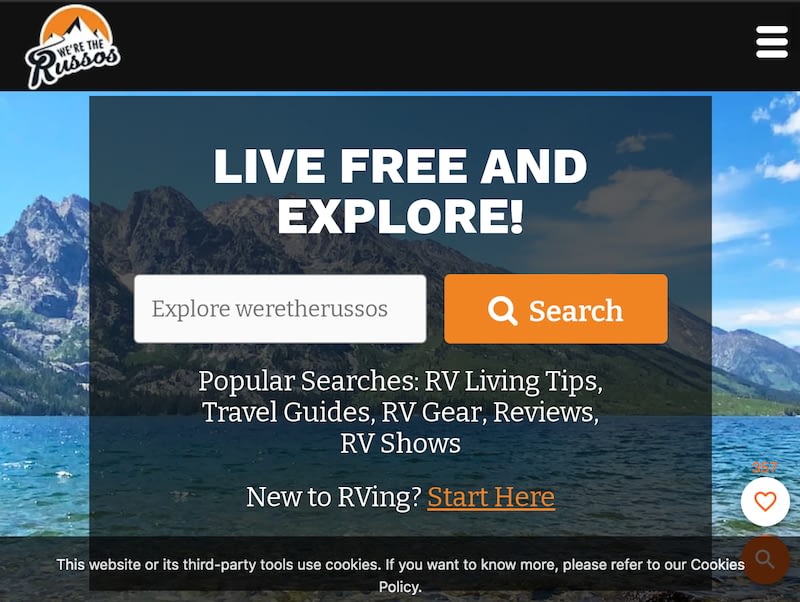