After cycling 1,000 miles from Koh Lanta to Chiang Mai I took a few weeks off the bike to relax, catch up on work, get a tune up and explore the city. I booked an apartment for a month, but after less than 3 weeks being stationary I was ready for the road. I packed my panniers in preparation for the next adventure and Hilux the Bike prepared by getting another flat tire the day before departure.

Once packed and loaded we set out south. Leaving Chiang Mai I turned onto a small two lane road that wound up into the rolling hills. By midday I stopped for a beer and water at a riverside mini-mart. An older gentlemen sat next to me, spoke in Thai the entire time, and when I smiled and got up to leave he grabbed my hand, shook it vigorously and in English exclaimed “I love you!”

A few minutes later I stopped to watch several elephants cooling themselves and drinking from a garden hose next to the road at an animal sanctuary. I spent the next few hours dodging elephant droppings on the road, passing more sanctuaries, and spotted a group of elephants and handlers lumbering through a dry riverbed into a tropical jungle valley.

The afternoon turned hot and the road turned up, and up, and up. I’d neglected to review the elevation on the map and soon I’d pushed 1km, then 3, then more as I walked beside the bike, panting and dripping sweat. Climbing along a dry and dusty ridge I ran out of water and leaned my head on my handlebars while I pushed the bike uphill, fighting dehydration cramps all over.

By evening I finally coasted down a steep descent into a town that had a hotel on Google Maps, but being a Friday night it was full. With few options in town I pushed the bike another kilometer into the countryside and collapsed in a luxury camp of canvas tents. It was more expensive than I hoped, but I was happy to be done with day one. I’d covered 53 miles and climbed nearly 6,000 feet, mostly in the last 20 miles, and I drifted off to sleep humbled and a bit concerned that I might have dangerously underestimated the mountains.

Day two started with a few more miles of pushing Hilux the Bike uphill to the boundary of Doi Inthanon National Park and then a long winding descent to the community in the valley below the mountain. After a coffee break and map review I was back on the road, feet shuffling beside the bike as we started the ascent of Doi Inthanon, the tallest mountain in Thailand.

After several hours of pushing the bike up the summit road I finally reached the peak at 2,565 meters (8,415 feet) above sea level. In the two days from Chiang Mai I’d climbed (read as pushed the bicycle) up 12,000 feet, mostly in the final 40 miles. Turning from the mountaintop I was very ready for some downhill coasting.

After screaming down the mountain with my disc brakes squealing I spun onto flatter land and rolled into the small town of Mae Chaem. I checked into a hotel with a deck that looked out over rice fields and mountains, the perfect spot to sit with a coffee at sunrise or a cold beer at sunset.

Mae Chaem was one of my favorite stops in all of Thailand. It was big enough for some choices but small enough to be serene, and absolutely gorgeous. I worked from a trendy coffee shop in the mornings, then the hotel deck in the afternoons, and took leisurely bike rides around town before dinner. After several days I was caught up on work,my legs were refreshed, and I felt ready to get back on the road.

The next stretch scared me a bit. I’d learned my lesson about not checking elevation, and reviewing the map it seemed that my best bet for finding the next town with a hotel would be 100km away with 9,000 feet of climbing in between. I thought that might be a bit burley so I decided to split it between two days. Day one was an easy 25km with 2,000 feet of climb and put me at a guesthouse in a bungalow perched above a river where I spent a lazy afternoon reading and relaxing.

The next morning I set out early to cover the rest of the distance and elevation. After a few hours of pushing and pedaling I pulled over to check the map for a place to get snacks and refill my water. Ohhhh crap…

Apparently I’d missed my turn a few clicks into the day and had spent the better part of 2 hours climbing up into a dead end mountain valley. Sitting on the side of a cornfield I weighed my options, scoured the map for potential salvage routes, and decided I just had to go back. It was a bummer, but the valley views had been stunningly beautiful and I got the chance to visit a small remote village off the tourist track. Besides, I couldn’t change anything, I’d just have to spin on and figure it out later.

Once back on the correct route I stopped for lunch, aka some snacks and a beer,in what felt like a truck stop mini-mart. There was a young Thai guy sitting at a table with a beer and he came over to cheers drinks. I devoured my snack cake as he drained his glass, bought another large bottle, opened it and poured me a glass. I finished my can, toasted my glass of beer and tore into another snack cake. Before I knew it he’d opened another large bottle and was pouring it between us. This round I timed my chugging and chewing to wrap up before another bottle was opened and we snapped a selfie as I backpedaled to the bike and returned to the road before I got too drunk.

A little buzzed, my post-wrong-turn mood lifted and I felt the boozy pain killer circulating through my sore legs. I still had a long way to go to find a hotel, and I had no idea how far I’d get before dark.

I spent the next 20 miles climbing and descending from 2,000 feet to 5,000 feet and back, dropping in and out of valleys, dripping sweat while push walking my bike up steep inclines. At the crest of one hill I was surprised by a man sitting atop an elephant on the side of the road as it slurped water out of a barrel in the back of his pickup truck. Luckily most summits had min-marts or refreshment stops where I could top up on water or imbibe another pain killing, mood boosting beer.

As the sun started to sink the towns I rode through seemed sporadic and more industrial than touristy. I passed one “hotel” listed on Google Maps but decided not to try it since it was a bit off the road and hadn’t had any reviews in the past year. Instead I pressed on, spun faster, and hoped to find a hotel before dark.

While that didn’t happen, I was treated to one of the best sunsets of the trip. Just as I reached the edge of a ridge that plummeted down into a valley the tropical forest dropped away and I could see the bright red sunset over undulating hills that spread out like a plush blanket to the border of Myanmar. As euphoric as it was the light faded fast and the road tipped into a steep 1,500 foot descent with potholes and hairpin turns that was truly terrifying in the faint light of my LED headlight. After an hour riding in the dark I came to a hotel on Google Maps just 1km off the road. I coasted into their driveway and took the first room on offer, glad to be off the bike.

My plan had been to split up the 100km 9,000 foot stretch into two days, but the missed turn and 4 hour detour meant that instead of splitting the burly route I actually did a 90km day with a whopping 12,000 feet of climbing, waaayyy more than what I had originally been afraid of! After fried rice and a beer I collapsed into bed and got a well earned night’s sleep.

The next morning I followed the gentle river valley road into town and stopped for coffee and 7 Eleven snacks. Turning north I followed a straight stretch of road that was generally downhill to my next destination, although there were still smaller climbs that had me off the bike and pushing again. I took plenty of breaks and enjoyed the scenery and felt like my body was in need of another extended rest.

Once in town I stopped at a few hotels to inquire about rooms. Several were full but I stumbled upon a simple homestay with single rooms just steps from the downtown night market and only $5 per night. I booked it, unloaded my gear, sprawled out on the bed and settled into a much needed few days of rest in Mae Hong Son.

Celebrating Christmas on the beach 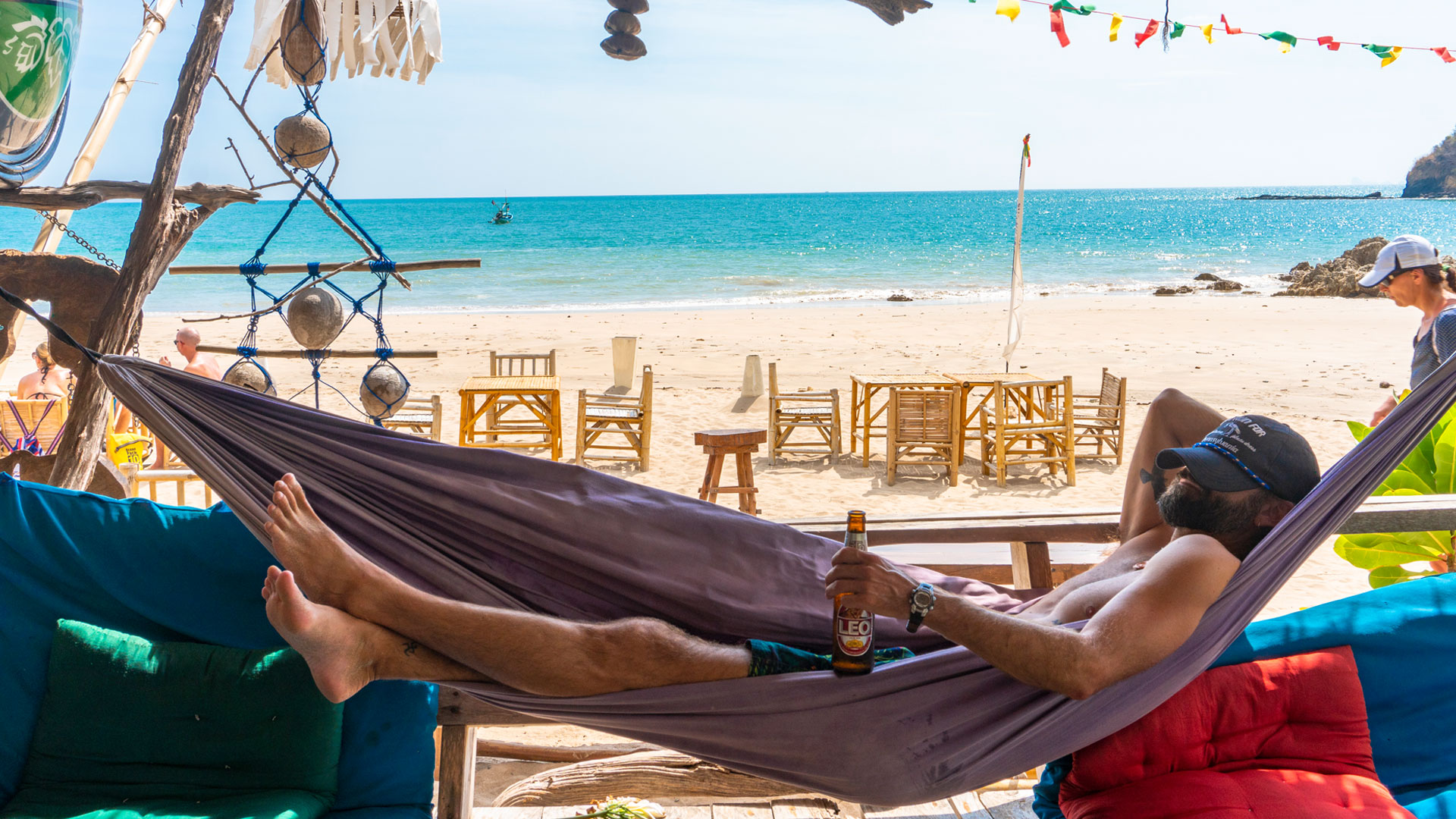 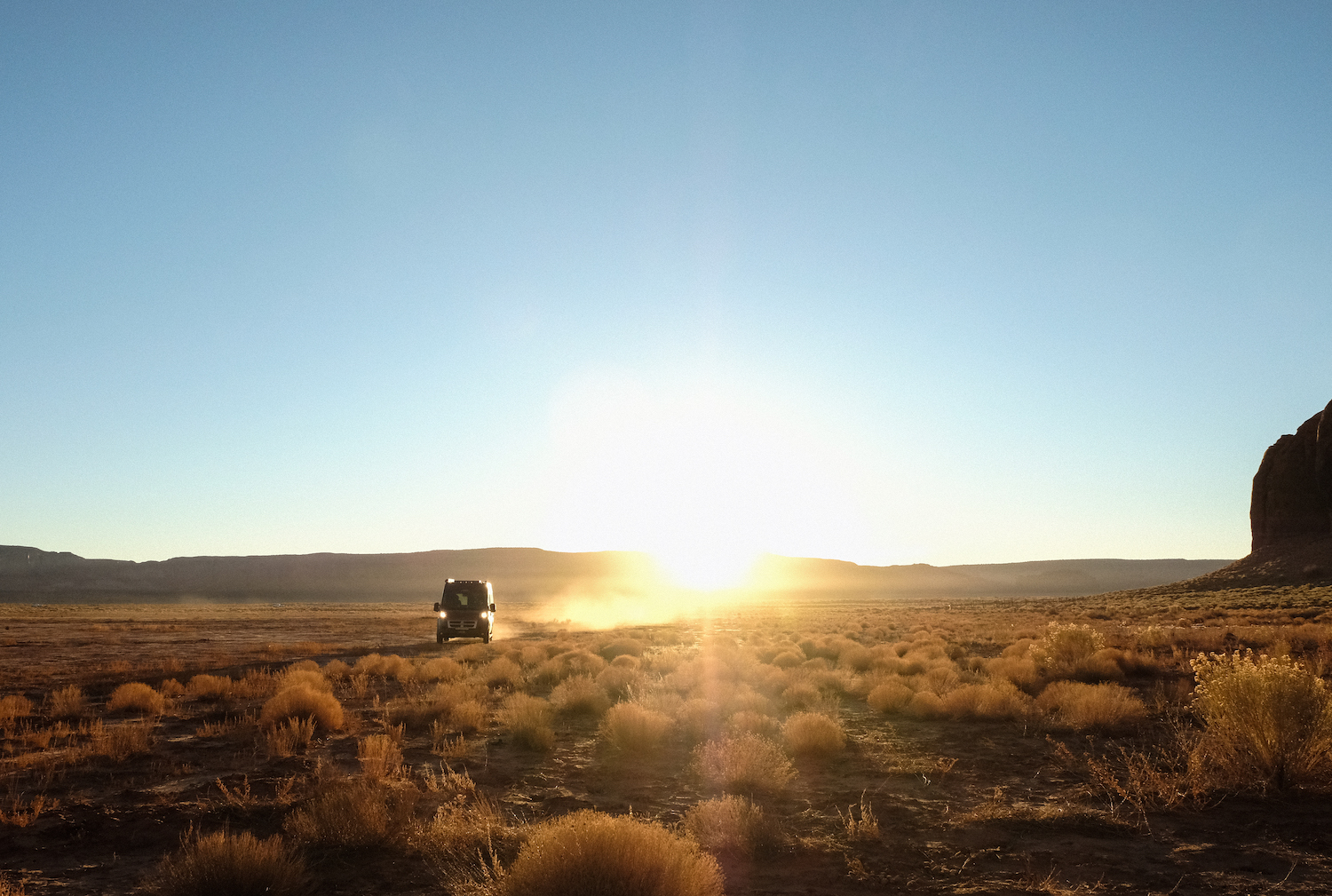